In the process of client’s goal directed striving, therapist has to help client’s Dohsa 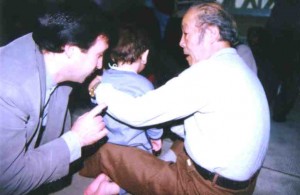 through which client has a chance to experience an action onto his own body according with the intended task and for a cooperating work with his therapist to the same goal. Thus by Dohsa-hou, the therapist is able to activate client’s mind and facilitate the activity of his self through the experiencing of goal directed striving for Dohsa , and working in cooperation with his therapist.

Many kinds of clinical trial have been reported in the field of body movement or motor action useful for physical and mental health. Some of them mainly aim to ask client to perform a Dohsa as an imposed task, and some do not include this performance. The former is named as one of Dohsa- hou, while the latter one is not. For instance, some emphasis to ask the client to strive to relax his/her muscle or body, and other expects to be brought a state of body relaxation as a secondary effect of some other motor behavior such as dancing, running and so on. The latter case is not counted as Dohsa-hou because it aims at body relaxation as a physiological phenomenon. On the contrary, Dohsa-hou treats client’s striving to relax his own body by himself as psychological phenomenon through body work.

At the beginning, Dohsa-hou had the aim of improving the motor difficulty of cerebral palsied children. Later it applied to autistic and hyperactive children. It stabilized their emotion, changed their daily life pattern of behavior, and also improved their postures. Schizophrenic patients can benefit from Dohsa-hou, their actions become vitalized to walk and in constant movement. It also applies to mentally retarded children, down syndrome children and young children with muscle dystrophy too. Aged persons with mental disorders are beneficial from this method. As a clinical use, in counseling for cases like depression and school refusal, Dohsa-hou was effective. Recently after the Kobe earthquake in Japan, Dohsa-hou was applied for the cases of PTSD (Post Traumatic Stress Disorder) and reported to be quite effective.